Some situations call for a quilt, others demand with such intensity that a quilt almost appears out of thin air. This was such a quilt. A couple I had met during my college years had recently announced they were in the midst of an adoption. They'd spent years hosting foreign exchange students, but knew they wanted a child of their own.  I knew right away I wanted to make a quilt for them and their little one, and I knew I wanted to use a + shape to celebrate the addition to their family. 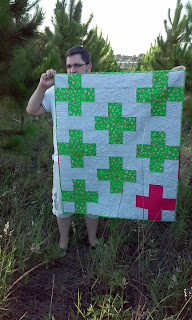 Fortunately, I had some yardage perfectly suited for this occasion in my stash. I used some Heather Ross strawberries in green surrounded by Architextures Crosshatch in Grey, I added a punch of pink with a Kaffe Fassett shot cotton. 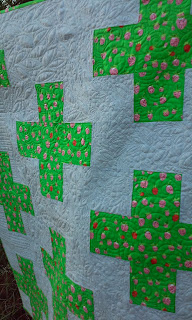 The pattern came from Southern Fabric and is aptly named The Easiest Quilt in the World. It really was super easy, and may become a go-to pattern for when the stork is out and about. This was so easy to put together I didn't even get to take photos while I was in process. Seriously, the top came together in about an hour, and that was from yardage to finished top!

I did make one modification to the pattern. If you follow the links above to look at the original quilt, you will notice there are two black squares, one in the center at the top and one in the center on the bottom. They appear to be + that have run out of our line of sight. I chose to make these two squares out of the background fabric rather than the focus fabric so that all of the + were contained within the quilt. 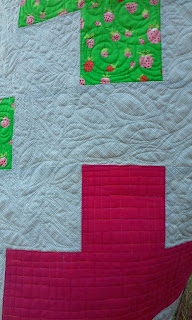 I quilted this little baby quilt on Louise, with some inspiration from Angela Walters who blogs at Quilting is My Therapy. I used spirals in the green + and cross hatching in the shocking pink +. I used a combination of leaves and pebbles in the background and drew a wavy meandering line and finished with straight line quilting.

The new family is special indeed. The two fathers were among the first who could jointly adopt in my childhood home state of Michigan. They were legally married during a brief period of time after a US District Court ruled the state's denial of marriage rights to same-sex couples unconstitutional and before an appeals court ordered a stay on the ruling. Little Baby "A" was due on June 13, but she didn't make her arrival until June 26th, the day the U.S. Supreme Court made their ruling on same-sex marriages. Not only does this baby quilt celebrate the addition to a family, but also the equality of the family with an = on the back. 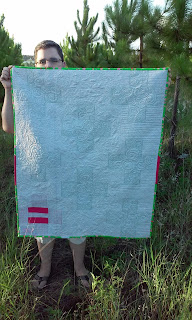 I have great admiration for this family and hope that one day my husband and I might follow in their footsteps and realize our dream of a family.

This was my quickest quilt, from yards of fabric to the mail box in three days. I'd like to say this is the first #lovewins quilt. There are several swaps that have formed on Instagram to celebrate marriage equality after the SCOTUS ruling on June 26th. Check out #lovewinsmini and #winninglovemini on Instagram for more of whats going on there. Also remember to leave a little comment love on the TGIFF link party hosted this week by Michelle at From Bolt to Beauty. The button for the event is on my sidebar.

What has been your quickest quilt?

Thank you for stopping among the groves. Please feel free to share any thoughts, comments or tangent ideas. I would love to hear your point of view and make every effort to respond via e-mail to you.

Jan Briggs
I'm a quilt-maker and elementary art teacher getting creative among the orange groves of central Florida. I love to share my quilt ideas and designs with the quilting community and look forward to quilting for you! 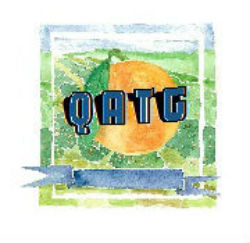